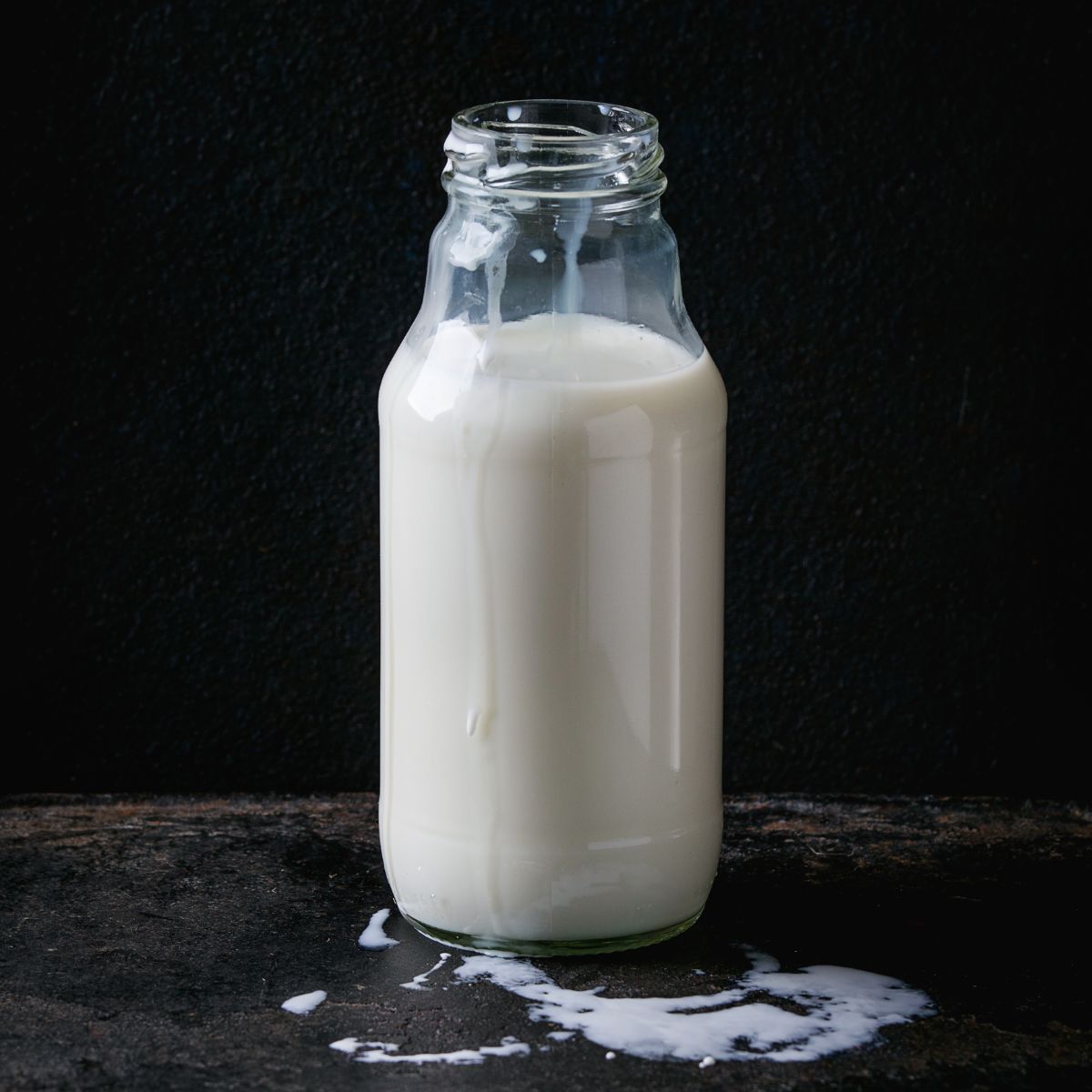 There are so many recipes with half and half you can make so it doesn’t go to waste. Half-and-half is also incredibly versatile. You can use it to make anything from pasta sauce to ice cream.

If you have leftover half and half on your fridge and are wondering what to do with it, we’ve got plenty of suggestions. In this article, we’ll go through everything you should know. From what is half and half to what to make with half and half when it’s been sitting in your fridge taking up space. Ready to get cooking?

Using Up Leftover Half and Half

These are just some examples of what to do with half and half. Keep reading if you want to learn about other leftover half and half recipes you can make at home.

Half and Half vs Heavy Cream vs Whole Milk

You’ve surely come across recipes that ask for half-and-half. And you might wonder how it differs from heavy cream or whole milk. Below, we tell you all about the differences and uses of half and half, heavy cream, and whole milk.

As its name suggests, half-and-half is a combination of half whole milk and half cream. Typically, this dairy product has a fat content of 10 to 12 percent. This makes it richer than milk and lighter than cream.

And what is half and half used for, you may ask. It can be used for many things, from sauces to desserts. You can also use it to make your morning coffee or this Starbucks iced caramel macchiato copycat.

If you’re wondering how to make half and half, the answer is very simple. To make homemade half and half, you have to combine 3/4 cup of milk and 1/4 cup of heavy cream. You can even use low-fat milk or skim milk if you want.

Heavy cream, also known as heavy whipping cream, is a blend of milk and milk fat. Although they are often confused, it is not the same thing as whipped cream. Their main difference is that whipped cream has a lower milk fat content.

In contrast to half and half, heavy cream can be whipped. This makes it ideal for preparing desserts such as ice cream and cake frosting. Other ways to use heavy cream are making soups and making homemade ricotta cheese!

Whole milk is a type of milk with 3.25 percent of fat. You can use whole milk instead of half-and-half in recipes, but the results won’t be the same. Mainly because whole milk is thinner and less creamy than half and half.

ingredient for drinks like this Korean strawberry milk and many desserts. But it’s not good for making sweet treats such as ice cream or whipped cream.

How long does half and half last?

Typically, half-and-half lasts three or five days past its expiration date. Once you open a carton of half and half, it has an average shelf life of seven to ten days, if you keep it in the fridge. Of course, this depends on the brand, so it’s important to read the label.

The best way to store half and half cartons is to put them in the fridge. Avoid putting them close to the door, as it can make them go bad faster. And remember to seal it tightly after every use.

Half and half has a longer shelf life than other dairy products, but this doesn’t mean it can’t go bad. The most common signs of spoilage in half-and-half are a sour odor and visible lumps. If you notice any of these signs, you should throw out the product.

14 Recipes With Half and Half

You can make many recipes using half and half. From scrambled eggs to a three-course dinner. Keep reading to learn about 14 recipes with half and half you should try!

This best breakfast casserole is perfect for your next brunch party or for your weekly meal prep. You’ll need simple ingredients like potatoes, eggs, half-and-half, ham, cheese, salt, and pepper. You can take it up a notch by adding bacon, caramelized onions, and parmesan cheese.

The best part is prepping everything will only take you 5 minutes. Then, you’ll have time to do other things while it bakes. And once it’s done, you can dive in or freeze it for another day.

Martha Stewart’s classic french toast is perfect for a breakfast charcuterie board. You can make this dish with a few ingredients, including half and half, eggs, butter, and any bread of your choice. And you can top it with maple syrup, chocolate sauce, powdered sugar, and fresh fruit.

This chicken noodle soup is one of our favorite recipes because it’s delicious and very easy to make. This soup is perfect for winter, but you can definitely enjoy it all year-round! To make this soup, you’ll need the following ingredients:

Melted butter and whole milk (or half-and-half) are the secrets to Colcannon. This is one of our favorite savory recipes using half and half because it’s ideal for any occasion. And the best part is that it’s very easy to make!

You can make this one-pot tortellini recipe in under 15 minutes, so it’s perfect for you if you’re on a busy schedule. To make it, you’ll need McCormick pasta seasoning, milk, butter, and frozen tortellini. For creamier pasta, substitute the milk for equal parts of half-and-half!

This creamy chicken crescent casserole recipe is simple but packed with flavor. To make this dish, you’ll need only five ingredients:

For a creamier casserole, substitute the milk for one measuring cup of half-and-half!

A classic quiche Lorraine is a simple but healthy dish that’s perfect for a dinner party. This recipe calls for spinach, cheese, shallots, egg yolks, kosher salt, and heavy cream. We recommend you substitute 1 cup heavy cream for equal parts half-and-half, so you’ll get a lighter quiche.

This Olive Garden’s Creamy Mushroom Sauce Pasta recipe is everything you need when hungry and craving some hearty and savory. Swap out the heavy cream for half and half and we promise you won’t know the difference.

This Olive Garden chicken piccata copycat is one of our favorite chicken recipes with half and half. Its cheesy and garlicky cream sauce goes well with pasta, rice, and freshly-baked bread. It also makes it the perfect dish to pair with a cool glass of white wine.

This Rasta Pasta Recipe is creamy and hearty with marinated chicken and bell peppers. The jerk seasoning gives it a solid kick to it! A great recipe for a special weekend meal or served on rotation any day of the week.

This chocolate ice cream is one of our favorite half and half dessert recipes! It is flavorful and very easy to make! You’ll need only five ingredients:

And you won’t need any fancy equipment to make it! You’ll only need a food processor and a freezer-safe dish.

If you’re looking for cake recipes with half and half cream, you should try this one-bowl vanilla cake. For this recipe, you’ll have to make homemade buttermilk by combining apple cider vinegar and half-and-half. This makes the cake fluffy and moist.

This chocolate and banana bread pudding is one of the easiest dessert recipes with half and half you can make. It’s soft and creamy on the inside, with a crunchy crumble layer on top. This bread pudding goes well with vanilla ice cream, but it’s also delicious by itself!

This dreamy Butterfinger cocktail is proof that half-and-half goes well with any cocktail. If you substitute the milk for half-and-half, you’ll get a cocktail with light cream and a sweet flavor. This is the perfect drink to wow your guests during your next dinner party!

Half-and-half is one of the most versatile ingredients in your kitchen. You can use it to make anything from a simple soup to this classic panna cotta. Its light and creamy consistency will take all your dishes to the next level.

Did you know that you can also use half and half as a substitute for many recipes? Here’s a list of whole milk substitutes and how to use each of them.

What are you waiting for? Try one of the many recipes with half and half we shared with you in this article!

Recipes to Use Up Extra Marshmallows

Recipes for Using Up Extra Eggs

Recipes to Use Up Leftover Sour Cream

All About Red Foods (From Savory to Sweet)