Are you in need of a Greek yogurt substitute? Maybe you stumbled across a fantastic recipe for zucchini bread that calls for Greek yogurt, but you’re out of it. You could go shopping and drag yourself to the store, or use one of many Greek yogurt alternatives that are available.

Made your choice? Good, let’s dive into all the options you have when you find yourself out of your favorite Greek yogurt.

Fortunately, the options for subbing out Greek yogurt are plenty. From sour cream to mashed banana, there is likely a Greek yogurt substitute in your kitchen. Each alternative can be used in various ways, whether you’re baking bread or creating a tasty spread.

Sour cream is possibly the closest Greek yogurt substitute you’ll find. It has a slightly sharper flavor, but the consistency is the same. Whether you’re making a sauce or a cake, sour cream is a great replacement item.

Please note that vegan sour cream cannot be used in the same way as regular sour cream or Greek yogurt. The vegan and dairy-free options are suitable for topping beef tacos or soups; baking with it would not yield the desired results.

Compared to Greek Yogurt, plain yogurt is much thinner and a touch less flavorful. However, the flavor and texture are similar when creating cookies or savory recipes with regular yogurt.

Some cooks and bakers create Greek yogurt from the plain by straining it in the refrigerator for a few hours. To do this, simply place a strainer over a bowl, place the yogurt in the strainer, and leave it alone. The refrigerator will keep it at a safe temperature, and only the thickest portions will remain in the strainer.

While you have the option to turn plain yogurt into Greek, it isn’t required for using it in cooking or baking. You can use it as a Greek yogurt substitute in a 1:1 ratio.

If you want more flavor in your yogurt, try adding a teaspoon of lemon juice. The slight kick can give your plain yogurt a tang like Greek yogurt.

When you think of cottage cheese in your cooking, you may wrinkle your nose at the difference in consistency. No one wants to bite into a fresh-baked muffin and find cottage cheese. Fortunately, using cottage cheese as a Greek yogurt substitute does not end up this way.

Psst… We have a fantastic Egg Bites Recipe that uses cottage cheese.

If you choose to use cottage cheese as a Greek yogurt substitute, you can drain it and then put it in the blender to get a similar texture. But it is not required if you’d rather skip the extra work. You can replace 1 cup of Greek yogurt with 1 cup of cottage cheese.

Although more uncommon, another excellent Greek yogurt substitute is kefir. Kefir is a fermented milk that typically comes from cows, goats, or sheep. It boasts an acidic flavor profile much like Greek yogurt and can be used in a variety of dishes, dips, and sauces.

Many grocery stores stock kefir, or you can make it at home by adding kefir grains to whole milk. If you have kefir on hand, it is an ideal substitute.

Using kefir in place of Greek yogurt is simple. Since it is the consistency of a very thin yogurt, you’ll want to use less kefir than yogurt. The correct use is ¾ cup of kefir for 1 cup of Greek yogurt.

You can use buttermilk in tons of recipes as a Greek yogurt substitute. It can be a good option if you have it on hand because of the tangy flavor. Many bakers and cooks claim buttermilk to be one of the best substitutes you can use.

Buttermilk is also a great source of protein and calcium. If you want to stick with dairy products when swapping out Greek yogurt, buttermilk is one of the best options.

With that said, if you don’t have buttermilk, you can create it by adding a few teaspoons of lemon juice to a cup of cream or whole milk. Let it sit for a few minutes before use or refrigeration.

Given the consistency of buttermilk, you don’t want to use it in the same amount as Greek yogurt. Instead, use ¾ cup of buttermilk when the recipe calls for 1 cup of Greek yogurt. It can be used in any recipe but does especially well with breads and cakes.

Don’t worry, no one is suggesting that you use expired milk in your recipes. That might be a little risky to your taste buds and your stomach! But you can make sour milk at home with just a couple of ingredients. It works well as a substitute for Greek yogurt because of its flavor, despite the difference in consistency.

Add a tablespoon of vinegar to a cup of whole milk to make sour milk. After you’ve stirred, use only ¾ cup in place of a cup of Greek yogurt to level out the moisture.

Simply swap the ingredients to use coconut cream as an alternative to Greek yogurt. Because of the thick texture of the cream, there is no need to change the measurements. A 1:1 ratio is perfect in this instance.

Cream cheese comes in various forms, including a block and whipped. Both can be used to sub out Greek yogurt. The robust and tasty flavor of cream cheese can add a rich finish to your savory dishes.

When using a block of cream cheese, use ¾ the amount of requested Greek yogurt. While the flavors are similar, the cream cheese in this state is thicker.

You may be aware that avocado is a superfood. While ‘superfood’ is a marketing term for foods packed with nutrients, avocados have many health benefits. As an additional benefit, it can be used in many recipes, including as a Greek yogurt substitute.

Whether you’re baking, cooking, or mixing up a dressing, avocado can work for your recipe.

Start with a few ripe avocados. To ensure ripeness, peel off the small stem. If it comes off easily and is green beneath, it is likely perfect for use.

Mash up an avocado and add a teaspoon of lemon or lime juice. You’ll want to mix it well to ensure the flavor is spread throughout. Use 1 cup of mashed avocado for 1 cup of Greek yogurt.

Have you ever considered using mayonnaise in your cakes or other baked goods? It might sound a bit gross, but it works. The rich flavor and creamy texture make this condiment an ideal Greek yogurt substitute.

Cake, muffins, sauces, egg salad, and any other recipe calling for Greek yogurt can be swapped for mayonnaise. The presence of oil might also make your baked goods extra moist and delicious. It’s a win-win!

Do you get flashbacks to toddlerhood at the mention of mashed bananas? The mashed fruit is not only for small children but can be used as an alternative to Greek yogurt. Because of the sweetness of bananas, it is ideal for baking.

You could also try mashed banana in other dishes, but the sweet flavor will likely remain. On the plus side, bananas are often an acceptable choice if you’re cutting back on dairy.

Choose a yellow banana over a brown, as the ripe ones will give a heavy banana flavor. Mash the banana and add two teaspoons of lemon juice to each cup. Use mashed banana in equal measurements to Greek yogurt.
It is also a good idea to consider how the sweetness of the banana might impact the flavor. You may want to use less sugar than the recipe calls for. Without any adjustments, this Greek yogurt substitute could make things a little too sweet.

Recipes Where You Can Use Greek Yogurt (or a substitute) 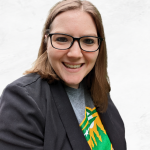 Kristina Speciale is a passionate home cook with a background in hospitality. After obtaining her MBA and deciding to start a family, Kristina left the industry for a freelance writing career. She enjoys spending time with her husband, three young children, and their family dog.

5 Easy Air Fryer Recipes
Join our mailing list to receive a free download with 5 delicious air fryer recipes!
Your information will *never* be shared or sold to a 3rd party.