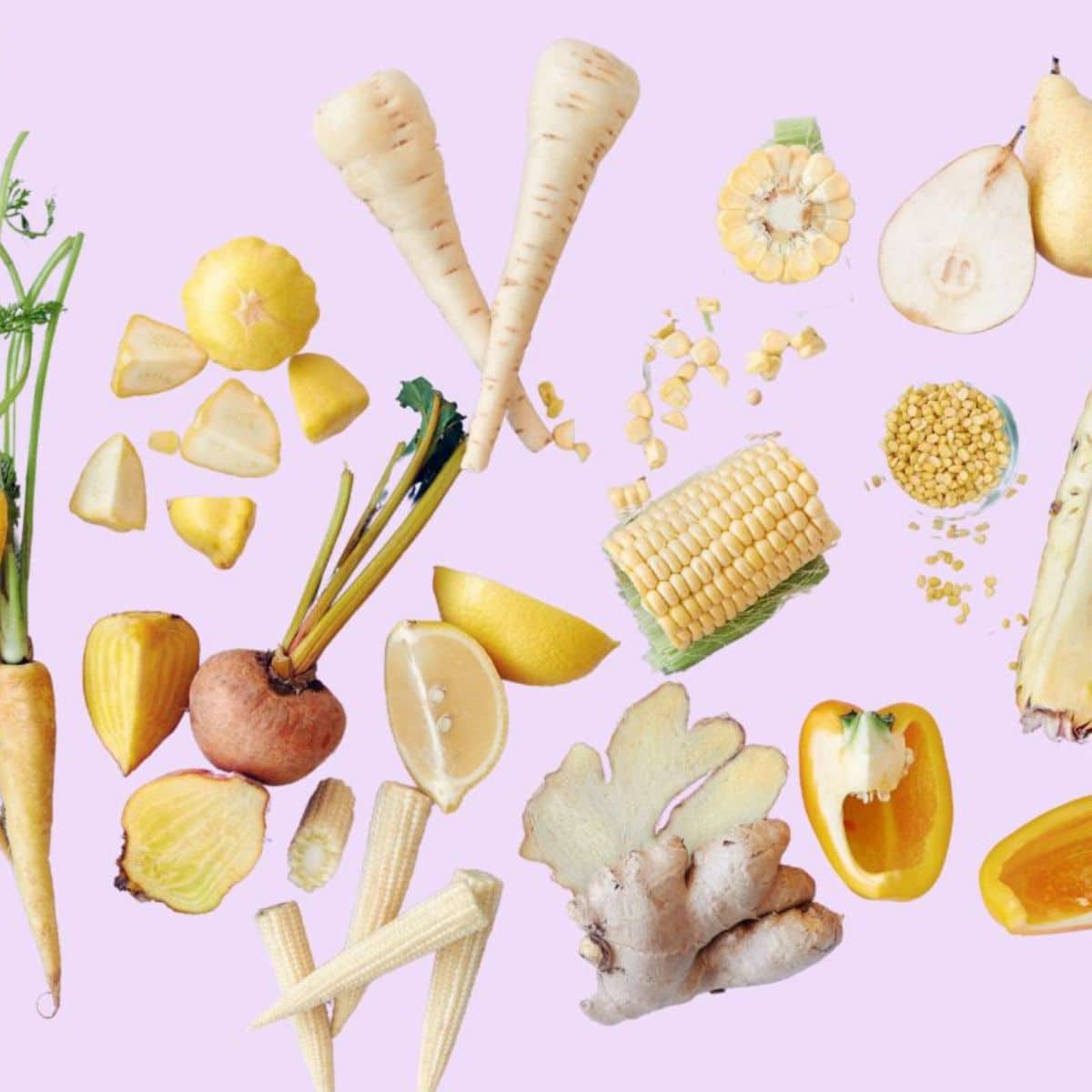 Those of us that enjoy flavorful, aromatic cuisine can’t help but salivate when we think of yellow foods. We begin to daydream of hearty Spanish-style curried rice and chicken (Arroz con Pollo), or spicy lentil dal with curry (curried lentils).

When it comes to yellow fruits and veggies, our brain links the color yellow to ripeness, and we feel reassured that our yellow produce is ready to eat. In fact, many of us tend to eat with our eyes first. We can all agree that adding yellow foods to a dish improves the visual presentation, as well as the flavor profile and nutritional content.

But what is it exactly about yellow foods that makes them an essential component of our daily diet? Let’s cover everything there is to know about yellow food and highlight a few recipes and snacks that we can include in our daily routine with ease.

Psst… Once you’ve learned all you need to know about yellow foods, check out our posts all about red foods, all about pink foods, and all about orange food!

Why Are yellow Foods Yellow?

Carotenoids are fat soluble pigments that are found in brightly colored fruits and vegetables. This includes yellow, orange, and red foods.

There are many types of carotenoids that contribute to pigment production in plants. However, xanthophylls in particular are what produce that naturally bright yellow pigment.

Xanthophylls are a form of oxygenated carotenoid that is typically found in vascular plants and algae. There are three primary forms of xanthophylls, namely zeaxanthin, lutein and cryptoxanthin.

Xanthophylls absorb indigo and blue light to facilitate photosynthesis. They also protect the plant cells from the damage caused by excessive sunlight. Xanthophylls do this by dissipating the excess energy in the form of heat.

Yellow foods can come in all shapes and sizes, as well as have varying intensities of yellow color (some bright, others quite pale) and nutrients.

To make your life easier, we have identified the naturally yellow foods with the best attributes! Below we have listed the top 5 yellow fruits and vegetables that will brighten up your dishes and your day!

A lemon is a hybrid between citrons and Seville oranges. This citrus fruit is well-known for its sour taste, and its naturally high vitamin C content.  In fact, one cup of raw lemon juice contains more than 100% of our daily vitamin C requirements.

However, one lesser-known fact is that lemons are also high in potassium and vitamin B6.

Lemons are usually not eaten whole, but instead the juice is used to add flavor to recipes for sauces, salads, cakes, smoothies, and the list goes on.

Pineapples are tropical fruits that have historically been found in South America. They have a tough, spiky exterior, but when peeled they reveal a soft, yellow, juicy, and sweet interior.

Most people are surprised to learn that a pineapple is actually a type of berry. However, it is no secret that this delicious fruit gives us tons of health benefits.

Bananas are one of the most widely consumed fruits in the world. This is because of its high availability and low costs, not to mention it’s sweet flavor and creamy texture. Amazingly enough, a banana is also a type of berry (this classification is based on the part of the tree which develops the fruit).

A mango is a tropical fruit with a large seed in the middle, that is surrounded by the edible flesh. When ripe, mangoes become sweet, soft, and succulent, with a bright yellow interior. The ripe fruit also has a strong, sweet aroma.

One cup of raw, sliced mango contains more than 60% of our daily vitamin C requirements. Mangoes are also great sources of vitamins B6, A, E and K, as well as the mineral potassium.

Pear trees are native to Southeast Asia, and the ripe fruit is sweet and juicy in flavor. A pear is quite similar to an apple in that they are both pome fruit that have evolved from a common ancestor. There are many varieties of pear, but one of the most well-known varieties is the Asian pear, also known as the Japanese pear.

The potato is a relative of the nightshade family and it was first cultivated in Peru from as far back as 6000 BCE. This root tuber comes in many varieties, with two of the most popular being Yukon gold potatoes and sweet potatoes.

Yellow bell peppers are simply green bell peppers that have been allowed to mature. During the ripening process, the green (unripe) bell pepper changes color to yellow, then orange, and then to red when it becomes fully ripe.

Bell peppers are also great sources of vitamins B6, B9, K1, E and A, as well as the mineral potassium.

Yellow squash, also known as summer squash, is a member of the zucchini family, and closely resembles the zucchini in shape and size. A yellow squash has a bright yellow exterior, and a pale-yellow interior that becomes soft and slightly sweet when steamed. The texture and flavor is frequently compared to that of pumpkin.

Butternut squash, also known as winter squash, grows much larger in size and has a very tough outer skin that is largely inedible. Butternut squash has a pale-yellow exterior and bright yellow flesh on the inside that also becomes soft and sweet when cooked.

Butternut squash is rich in vitamins A, C, E, B1, B3, B6 and folate, as well as magnesium, potassium, and manganese.

The jackfruit is the largest known tree-bearing fruit and is a relative of the fig and breadfruit family. The external skin is thick, bumpy, and green in color, but when peeled, the interior is soft, yellow, and fleshy, with many stringy pods contained inside.

Jackfruits are a great source of plant-based protein and dietary fiber. They are also a good source of the minerals magnesium, potassium, copper and manganese.

Corn as we know it today is derived from a primitive wild grass plant native to central Mexico called teosinte. Also referred to as maize, corn was domesticated over thousands of years to become one of the most important crops on the planet.

One cup of raw corn contains more than 10% of our daily requirement of amino acids. This includes histidine, isoleucine, leucine, threonine, valine, phenylalanine, and tyrosine. Corn is also a good source of potassium and magnesium.

Who said that yellow snacks have to be boring? Being nutritious is a significant plus, but if it’s not delicious, why bother? Here are 3 naturally yellow snack categories we can enjoy without a guilty conscience. Below are some great ready-to-eat snacks that are naturally yellow (not a yellow number 5 food coloring in site!)

Fun fact, grass actually contains the carotenoid called beta-carotene, which is fat soluble. Beta-carotene accumulates and is stored in the milk fat of grass-fed cows. However, the milk itself appears white at first because the fat is initially concealed by protein clusters.

The pigment is released after the bacterial culture is added during the cheese making phase, and the resulting cheese has a yellowish hue.

Dairy is a good source of calcium, vitamin D, potassium, and protein. Dairy products should be used in moderation for best results.

Just the Cheese Bars are a delicious snack that is low in calories, and can be enjoyed anywhere, anytime! If you are on the more conservative side, there’s nothing wrong with sticking to these wholesome Colby Jack Cheese Snack Sticks.

The problem with fruit snacks is that most of them are so high in added sugars that it overshadows any health benefits contained within.

Luckily, we have found a range of natural, sugar-free, non-GMO fruit snacks that bridges the gap between taste and nutritional value. Among the best yellow snack options include the:

If dried fruit isn’t your thing, fear not! Try this Dairy-Free Mango Sorbetto from Talenti. This ice cream is delicious on its own, but can also be added to smoothies or milkshakes for an extra lift. Good luck with portion control!

Now that we have our yellow fruit, veggies and snacks covered, let’s combine what we’ve learned to make some savory, yellow-inspired meals!

You will never look at French fries the same again! In this recipe, you will use either pre-cooked or quick cook polenta to make bite sized wedges. The wedges are then fried in truffle-infused olive oil and enhanced with truffle salt.

This recipe is gluten-free, and polenta is a well-known healthy carb option.

Nothing makes you feel more comforted, warm and at peace than a steamy, creamy, delicious, and nutritious bowl of hearty soup. This recipe only requires a few ingredients and is quick and easy to prepare!

In fact, grab a bowl of pull-apart garlic bread as a side dish and you will simply be forced to put this recipe as your #1 favorite meal of all time.

Smoked Corn on the Cob (With or Without a Smoker)

Listen, you haven’t really tried corn unless you have had this insanely delicious smoked corn recipe.  You only need to taste this delicious side dish once and it will be making a special appearance on your menu every week for the rest of the year!

Have questions or suggestions about what you’ve learned about yellow foods? Leave them in the comments below.

All About Red Foods (From Savory to Sweet)