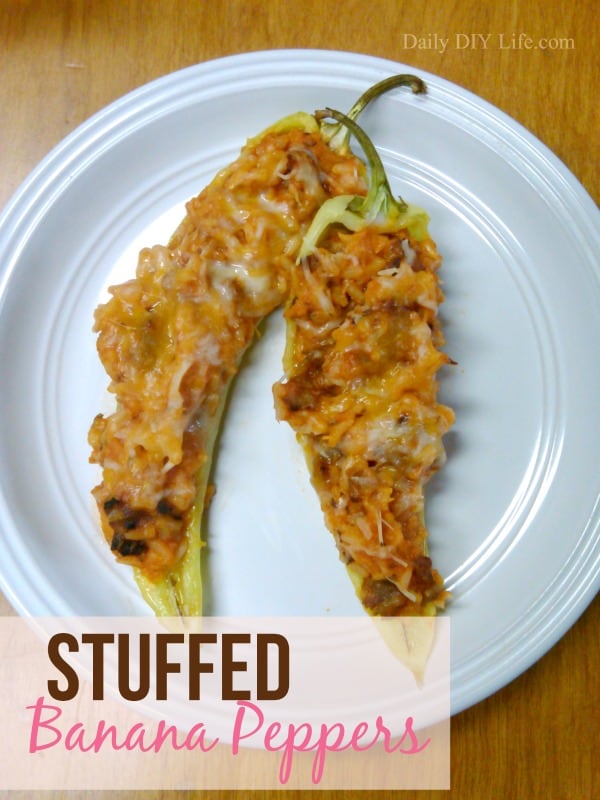 When it comes to making stuffed peppers, don’t draw the line at using traditional bell peppers. Try using something unique or something with a spicy kick, like these mouth-watering Stuffed Banana Peppers.

I always use a mixture of sweet banana peppers and what we believe are Hungarian wax peppers after a quick google search. With the farm stands bursting with fresh produce this time of year, peppers are popping up all over, and buying seasonal vegetables and fruits also makes them very affordable.

There are so many reasons why stuffed banana peppers are a delicious recipe. For starters, the peppers themselves are incredibly flavorful and add a great contrast in texture to the sausage and cheese stuffing.

But moreover, the combination of ingredients in this dish just works so well together. The Italian sausage provides a lovely savory flavor, while the Parmesan cheese adds a rich flavor.

All of this is then topped off with a delicious marinara sauce, resulting in a dish that is packed full of flavor. Whether you’re looking for a healthy weeknight meal or something special to serve at a party, stuffed banana peppers are definitely the recipe for you!

Are Banana Peppers and Pepperoncinis the same?

Banana peppers and Pepperoncinis are both chili peppers, but they have several differences. Below are a few of the differences:

How to Make Stuffed Banana Peppers 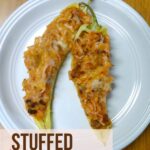 Print Recipe
No ratings yet

I admit that when our dear friend brought us these banana peppers, I didn’t expect them to be spicy! Once my fingers stopped tingling, I did a little research, and I discovered that sweet banana peppers and Hungarian wax peppers look VERY similar! The peppers we had were a mix of BOTH, and the only way I could tell them apart was to taste one.

When it comes to hot peppers, most of the heat resides in the seeds and the ribbing inside. If you clean this out, you can reduce the heat of a pepper drastically. I urge you not to use your hands to do this. Wear gloves and use a spoon to scoop out the inside when cleaning hot peppers of any kind.

Other Ways to Stuff Banana Pepper

There are all sorts of ways to stuff banana peppers. You can go with a simple mixture of ground meat, rice, and seasoning, or get a bit more creative and come up with something really special.

My favorite recipe for stuffed banana peppers is by far this Italian version we’ve covered in this post. But there are a few ways to vary the recipe and keep it fresh.

If you’re looking for something a bit lighter, you could put an Asian spin on your stuffed banana peppers. Try a mixture of cooked shrimp, edamame, and teriyaki sauce. You could also use chicken or pork if you prefer. The peppers are quickly roasted until tender then stuffed with the delicious filling.

Peppery Pizza: Start with a classic pizza crust and top it with banana peppers, pepperoni, and mozzarella cheese. The result is a delicious and spicy pizza that everyone will love.

Pickled Peppers: Add some pickled banana peppers to your next sandwich or salad for a tangy and spicy flavor boost.

Banana Pepper Poppers: These poppers are filled with cheese and bacon, making them a tasty and fun snack option.

Chowchow: This Southern relish is made with banana peppers, onions, green tomatoes, and vinegar. It’s the perfect condiment for hot dogs, hamburgers, or just about anything else!

Blistered Peppers: Cook fresh banana peppers on the grill until they’re blistered and blackened for a smoky flavor explosion.

What are the health benefits of Banana Peppers?

According to WebMD, Banana Peppers have many health benefits. Here are just a few.

They’re Good for Your Brain

Banana peppers are a good source of vitamin B6, which is important for the production of dopamine and serotonin.

Banana peppers are a great way to lower blood pressure.

Banana peppers are a good food choice for people who are looking to lose weight.

They Help With Digestion

Banana peppers are a great food to eat if you’re looking for a way to improve your digestion.

3 thoughts on “Stuffed Banana Peppers – Not Your Grandmas Stuffed Peppers”

What to Serve With Sloppy Joes: 41 Recipe Ideas